Over 650 lawsuits have been filed in federal and state courts across the United States against the 3M Company for damages incurred from allegedly defective earplugs 3M distributed to the United States Government and used by the U.S. Military and the U.S. Border Patrol. 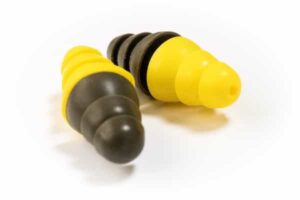 The earplugs, Dual-Ended Combat ArmsTM Earplugs (CAEV2), had a unique dual-ended design with the yellow-colored end intended to allow the user to hear low-level sounds while the green or olive-colored end does not allow any sound to pass through and is to be used when intense sounds are expected.

How Are The 3M Ear Plugs Defective?

3M marketed the earplugs to the U.S Government as having excellent Noise Reduction Ratings (NRR) which is a measure of the ear plug’s effectiveness to reduce noise. However, an alleged design defect allows the earplugs to loosen while implanted, which causes the user to lose sound protection.

In 2016, the U.S. Government filed a Qui Tam suit against 3M alleging it sold the CAEV2 earplugs to the Government without disclosing this defect. Later that year, 3M settled these allegations agreeing to pay a total of $9.1 million.

Hearing loss is a big concern for military service members who are often exposed to deafening noises during training and service overseas.

In 2003, almost 30% of veterans had tinnitus at discharge, with 15% of veterans suffering moderate to severe hearing loss.

The current numbers are even worse, with over half of all combat soldiers suffering from significant hearing loss.

Sound is measured in decibels (dB) with a person with normal hearing able to hear sounds from 0 to 140 dB. Any sounds greater than 90 dB can cause discomfort with sounds greater than 120 dB resulting in potential temporary or permanent hearing loss.

Almost all military firearms, grenades, and missiles measure far over 120 decibels. A 9mm pistol registers sound at 157 dB, as does the M-16 rifle carried by most military members.

Military individuals who carry more massive weapons like the MAAWS recoilless rifle and the light antitank weapon are exposed to sounds over 182 dB. Putting these numbers into perspective, a rock concert typically measures 110 decibels, a jet engine at takeoff measures 140 decibels, and a rocket at launch measures 180 decibels.

The 3M earplugs were purchased and distributed to the U.S. Government from 2003 to 2015.

The U.S. Government then distributed these to military personnel, some federal law enforcement personnel including the Border Patrol and some civilian contractors.

While all branches of the military used the CAEV2 earplugs, they were primarily used by the Army, Marines, and National Guard. The U.S. Navy and Air Force used a different brand of earplugs due to the frequency as their personnel were exposed to tremendously damaging sounds like jet engines.

How Do I Know If I Used the CAEV2 Ear Plugs?

How Do I Know If I Have a Claim?

If you used a dual-ended earplug during the period from 2003 to 2015 and also suffered tinnitus or hearing loss, you may have a claim for compensation.

The military performs a hearing check on all service members at the time of enlistment, when the service member leaves the military and at various points in between. Therefore, any hearing loss should be substantiated, at least in part, from service records.

How Many Ear Plug Lawsuits Have Been Filed?

Almost 200 cases have been filed in various federal and state courts across the United States with the bulk of these filed in federal courts.

If you are in the military, law enforcement, or a veteran, you used these dual-sided earplugs between 2003 and 2015 and suffered tinnitus or hearing loss, you may have a legal claim for compensation. To find out, please contact us for a no cost, no obligation consultation.