California has experienced catastrophic wildfire seasons for over a decade. For the past couple of years, we’ve had both the largest wildfire in modern history and the most destructive wildfire occurring within months of each other.

The Thomas Fire and Montecito Mudslides

On December 4, 2017, the Thomas Fire erupted in Ventura county and ended up as the largest wildfire in modern history, in terms of acreage burned, destroying over 280,000 acres in Ventura and Santa Barbara counties before it was contained.

The Thomas Fire destroyed over 1,063 homes and businesses. The Thomas Fire saw the mobilization of over 8,500 firefighters to fight it, the largest mobilization to combat a wildfire in California history. The fire became so large and powerful that it generated its own weather, a so-called “firestorm.”

There were two ignition points for the Thomas Fire, both of which started less than 30 minutes apart. The first began at 6:26 p.m. just north of Santa Paula near Thomas Aquinas College in Ventura County. A second ignition point occurred a short time later about four miles away near Upper Ojai. Multiple eyewitness reports note the fire at the second location was sparked by an exploding transformer. And now there is evidence that a So Cal Edison crew was working on a construction site at the location of the first ignition and accidentally started that fire.

The fire also burned vegetation over hundreds of thousands of acres of scrubland and mountainous terrain. Shortly after the fire was controlled, a rainstorm hit Ventura and Santa Barbara counties dropping between 2 to 4 inches of rain over two days including an intense five-minute period where almost 0.5 inches of rain fell. With all vegetation gone, the intense rainfall triggered massive mudslides in the Santa Ynez mountains. Traveling at speeds of 20 mph, these mudslides slammed into the community of Montecito below enveloping hundreds of homes, killing 21 residents and injuring 163 others. These mudslides were a direct result of the Thomas Fire.

On October 8, 2017, the Tubbs Fire began in Sonoma County about 12 miles northeast of the City of Santa Rosa. Fueled by fierce winds and extremely dry conditions, the Tubbs Fire exploded in growth. By the time it was contained, it had caused 22 deaths and destroyed almost 6,000 homes and businesses in Sonoma and Napa counties.

At the time, The Tubbs Fire became the most destructive wildfire, in terms of structures destroyed, in California history. However, this record was surpassed only a year later by the massive Camp Fire that destroyed the town of Paradise, California. CAL Fire determined the ignition source of this wildfire was the electrical system of a private residence.

On November 8, 2018, the disastrous Camp Fire began in Butte County during a period of extremely low humidity and strong winds (called the “Diablo winds”). The fire began about 6:15 a.m. and exploded across Butte County. By the time the Camp Fire was completely contained, it had destroyed 18,804 structures, killed 85 civilians and destroyed 153,336 acres of land.

The Camp Fire is the most destructive wildfire in California history in terms of homes and business destroyed and lives lost, shattering the record set by the Tubbs Fire only a year earlier. The cause of the Camp Fire was with a PG&E power transmission line.

On November 8, 2018, the Woolsey Fire began in Los Angeles and Ventura Counties and was one of a number of devastating wildfires ignited on the same date. The Woolsey Fire destroyed almost 97,000 acres of land, 1,643 homes, business or other structures and killed three people before it was fully contained. The fire burned through part of the Santa Monica mountains making its way to Malibu where it destroyed hundreds of homes.

Causes of the Wildfires?

Since 2014, California utilities are required to report each fire incident on one of their power lines. Of the 2,009 incidents reported since 2014, PG&E lines were responsible for 1,552 of these fires. So Cal Edison, which serves a customer base almost identical in size to PG&E, reported 347 incidents by comparison.

California Fire (CAL Fire) conducts investigations to determine the cause of all major wildfires in California. In the 2017 and 2018 fire outbreaks, CAL Fire found public utilities responsible for starting a frighteningly large number of the most destructive fires.

CAL Fire referred the results of a number of these investigations to the District Attorney’s Offices of the fire-damaged counties due to evidence indicating PG&E violated state law in the maintenance of its power lines.

This would not be the first occasion that one or more of the California utilities were found to be criminally at fault in igniting a wildfire. PG&E was subject to a criminal indictment for its role in causing a 2010 natural gas explosion in San Bruno that killed eight people and injured 58. PG&E was fined $1.6 billion for the explosion after being found guilty of six felony charges by a federal jury. The explosion was due to faulty record-keeping and shoddy maintenance by PG&E.

Other significant wildfires that utility companies were found to have caused include the 2015 Butte Fire caused by a negligently maintained PG&E power line destroyed 70,868 acres, 800 structures and caused 2 fatalities and the 2007 Witch-Guejito Fires caused by poorly maintained SDG&E power lines that destroyed 247,000 acres, 1,800 structures including 1,265 homes and caused 2 fatalities.

Why File a Wildfire Lawsuit?

While many wildfire victims have insurance, it is usually inadequate to completely rebuild or replace the home and real property destroyed to pre-fire condition.

It is also typically inadequate to compensate victims for all of the personal property lost, not to mention the personal items which have little to no intrinsic value, but which are priceless to the owners. 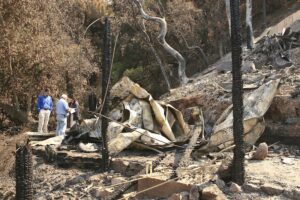 Unfortunately, there will be many that had no insurance coverage and are dependent upon FEMA aid which is usually inadequate to completely rebuild or replace a lost property.

A civil lawsuit can ensure that all your losses are recouped instead of being limited by the scope or amount of your insurance.

While many people insure the cost to replace or rebuild their home, the contents of the home and other personal property, as well as trees, flowers, plants and other landscaping are frequently significantly underinsured. The cost of replacing these items can greatly exceed the cost of repairing the home.

There are several types of damages that are recoverable in a wildfire lawsuit. Wildfires commonly cause fatalities and physical injuries. Persons who suffered a personal injury may be able to recover (1) reimbursement for medical expenses, both past, and future; (2) pain and suffering damages (both past and future); and (3) lost past income due to missed work as well as any loss of future income from the fires.

For property damage, wildfire victims may recover the cost of repairing or replacing: (1) lost homes and other structures; (2) lost personal property including automobiles, furniture, and pets; (3) lost trees and landscaping; (4) damaged property such as swimming pools, retaining walls and fences; and (5) erosion damage.

Reimbursement for evacuation and temporary displacement damages can also be sought.

Wildfire victims may also seek compensation for any emotional or psychological damages from the fires such as mental anguish, emotional distress and inconvenience, and annoyance.

The costs associated with these wildfires in terms of human lives lost, homes and business burned but also the financial costs to fight these fires as well as repair the immense damage they cause, demands that we should take every feasible step to minimize these fires. This includes ensuring the various utility companies in this State properly service and maintain their power lines, power poles and transformers as well as designing these devices in the safest manner possible. This is particularly important during times of the year when Southern California experiences the Santa Ana winds and Northern California, the Diablo winds.

It is only fair that the party or parties responsible for these horrific wildfires pays for the damages they have caused. The victims of these fires and the taxpayers should not bear the costs which are now billions of dollars a year.

Doyle APC lawyers have extensive wildfire litigation experience having represented hundreds of individuals whose homes and businesses were destroyed by wildfires.

Wildfire litigation is extremely complex. A myriad of experts is frequently required to prove liability including meteorological experts, wildfire investigation experts as well as experts in power line maintenance. But more importantly, are the experts needed to prove a homeowner’s or business owner’s losses. This includes builders to ensure the repair or rebuild costs are adequate, arborists, erosion experts, and landscape economists to ensure the cost to replace lost trees, plants and other landscaping are appropriately calculated.

If you or a family member suffered losses from a California wildfire, you can contact us for a free legal consultation.